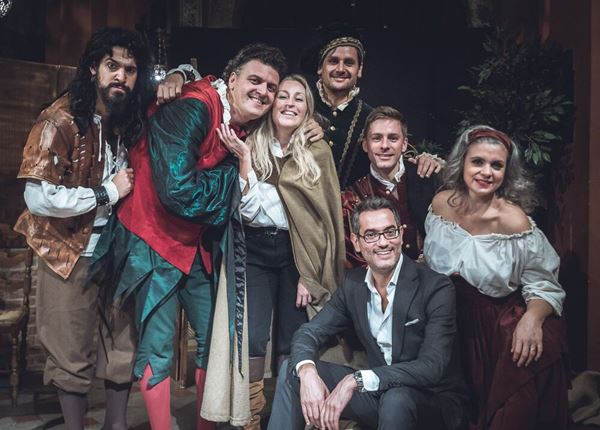 The intimate setting of St. Mark’s is the perfect backdrop for Giacomo Puccini’s masterpiece. This is the dramatic story depicting the love of the painter Cavaradossi for Floria Tosca, a famous singer. The opera, with five performers, ends tragically after the treachery of Scarpia, the Chief of Police.

The story, inspiration for the movies “Moulin Rouge” with Nicole Kidman or “Pretty Woman” with Richard Gere and Julia Roberts, La Traviata, “The Fallen One”, sees courtesan Violetta, falling in love with Alfredo Germont, a young nobleman, against the will of his father, Giorgio Germont. (performed by five singers).

Rigoletto is the tragic story of the hunchbacked jester of the Duke of Mantua. Rigoletto, trying to hide his beautiful daughter Gilda from the duke and the world, is cursed by Count Monterone and plans to kill the duke with the help of the assassin Sparafucile (performed by seven singers).

THE MARRIAGE OF FIGARO

One of Wolfgang Amadeus Mozart’s most successful works, this comedy, sung by five performers, is full of misunderstanding and jokes. Figaro is due to marry Susanna. Both are servants of Count Almaviva, who also has his eye on Susanna. The Countess is not at all amused by the escapades of her husband and tries to trap the Count with the help of Susanna (performed by five singers).

THE BARBER OF SEVILLE

The soldier Don José, the toreador Escamillo on one side and two women, the exciting Carmen and Micaela on the other. Don José helps Carmen to escape from prison but ends up getting deeper into trouble, not least because Escamillo is head-over-heels in love with Carmen too (performed by five singers).

One of the most touching love stories ever - Rodolfo the poet and Mimi the seamstress find each other in Paris. Life as a Bohemian is difficult, but with help from their friends Marcello the painter and Musetta the showgirl, they manage. However, Mimi’s fragile health and Rodolfo’s fierce temper leads the opera to take a dramatic turn (performed by four singers).

The inexorable fight between the troubadour Manric o and the Count di Luna for Leonora, the beautiful countess. The powerful gipsy Azucena, looking for revenge because of an old story between her mother and the Count di Luna’s father. Azucena wild emotions as the musical center of Verdi’s masterpiece, placed in the 15th century Zaragoza in Spain, performed by five singers.

Nemorino, a poor peasant, is in love with Adina, a beautiful landowner. When Nemorino hears Adina reading to her workers the story of Tristan and Isolde, he is convinced that a magic potion will gain Adina's love for him. He is afraid she loves the self-important Sergeant Belcore who appears with his regiment and immediately proposes marriage to Adina in front of everyone. The traveling quack salesman, Dulcamara (the self-proclaimed Dr. Encyclopedia), arrives, selling his bottled cure-all to the townspeople. Nemorino innocently asks Dulcamara if he has anything like Isolde's love potion. Dulcamara says he does, selling it to Nemorino at a price matching exactly the contents of Nemorino's pockets (performed by five singers).

Don Pasquale, an old rich man, wants to marry the poor young widow Norina, but she is in love with Don Pasquale's nephew Ernesto. It's up to Doctor Malatesta to resolve this more than funny constellation.

Although sometimes classified as comic, it blends comedy, melodrama and supernatural elements – Don Giovanni, a womanizer who becomes also a murderer, a young, arrogant, sexually promiscuous nobleman, abuses and outrages everyone else in the cast, until he encounters something he cannot kill, beat up, dodge, or outwit (performed by eight singers).

The Magic Flute has always been one of the most beloved works in the operatic repertoire, and is presently the most frequently performed opera worldwide, maybe because it tells the story of the eternal fight of good and evil (Sarastro and the Queen of the Night) with beautiful melodies and famous arias. Tamino and Pamina, Papageno and Papagena will find their way to a happy end (performed by eight singers).

In 1904, a U.S. Naval officer, Pinkerton, rents a house on a hill in Nagasaki, Japan for him and his soon-to-be wife, Butterfly. Her real name is Cio-Cio San. She is a 15 year-old Japanese girl whom he is marrying for convenience, since he intends to leave her once he finds a proper American wife – the story cannot end rather than in a drama and fantastic music (performed by five singers).

Ferrando and Guglielmo (two officers) claim that their fiancées (Dorabella and Fiordiligi) will be eternally faithful. Don Alfonso joins the discussion and lays a wager with the two officers, claiming he can prove in a day's time that these two women (like all women) are fickle. (performed by five singers).

Scotland in the 16th century: Lucia loves Edgardo, who belongs to the family of the behated Ravenswood. Lucia but is forced into a marriage with Arturo by her brother Enrico, but she kills Arturo after the wedding and goes mad. An exciting story with beautiful melodies of Donizetti (performed by six singers).